Restoring the Courthouse – Long May She Stand 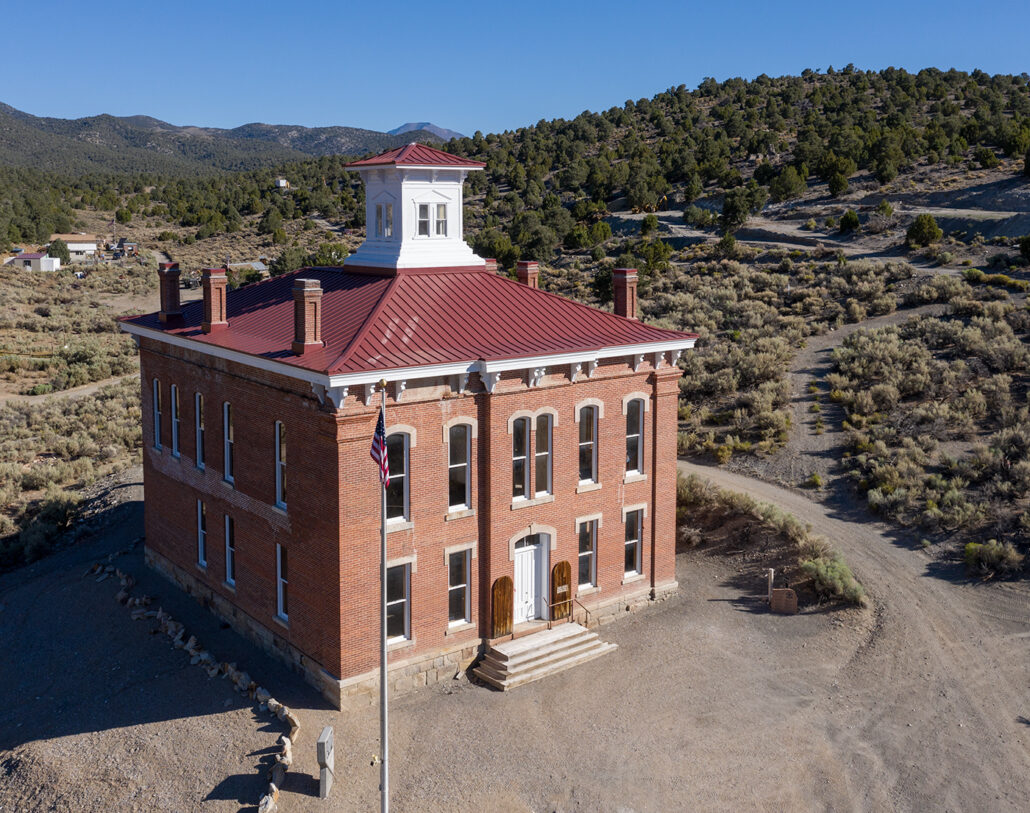 The Belmont Courthouse nestled at the head of Ralston Valley, at one time stood as an elegant center piece of the county seat of Nye County, Nevada.

The building of it began in 1875 and it was completed in 1876; Now she is old and worn and in need of love and care. One can still see her stately elegance where she has stood for many years. Residents and interested folks have recognized this need and formed an organization called The Friends of the Belmont Courthouse. Their goals are to restore and save this historic gem by giving her a facelift and much needed structural repairs.

Windows were broken and removed leaving the interior exposed to the harsh elements.

The jail cells were torn out and used in Gabbs, Nevada only to be returned in 1991 and placed outside the brick jail structure. Over time a deteriorating roof caused water leakage and structural damage. Most of the interior contents or architectural elements have disappeared including furniture, heating stoves, hardware, ornate wood trim, flooring, and the like.

On June 13, 1972 the town of Belmont was placed on the National Register of Historical Places.

The courthouse was recognized as a part of this historic district. The two story red brick building was transferred to the Nevada Division of State Parks, State of Nevada on August 20, 1974. A preservation effort was undertaken in 1975 to restore and stabilize the courthouse. At that time a metal roof was replaced, stairs were braced, exterior wood was painted, faulty and weak structural systems were corrected and the cupola was restored. Plastic sheeting was installed on all windows as protection from inclement weather. A seismic retrofit was completed in 2007. The building was again transferred in 2011 back to Nye County with both entities in agreement because of budget cuts. Nye County would be able to use volunteer help to rehabilitate the courthouse, where the Park Service could not. Late in 2011 the roof was temporarily sealed in preparation for winter.

The Friends of the Belmont Courthouse is always looking for historical photographs, particularly photographs taken in or before the 1940’s of the courtroom or offices in their original state, and would be grateful for copies of photos that would help with the restoration process.

Help us preserve the past and inspire future generations. Whatever the amount, we appreciate your support.
Make a Donation
Scroll to top