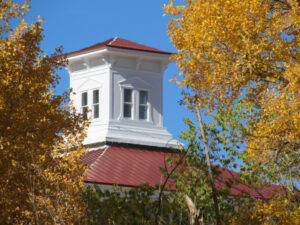 The new roof for the Courthouse is near completion and is turning out beautifully as these photos show. As many of you might already know, Nye County generously provided funding for the roof project. The job went out to bid this past summer with Bison Construction of Washoe Valley, NV being awarded the work. They have worked closely with the Friends of the Belmont Courthouse, Nye County personnel and Nevada State Parks to make the project a reality.

In September the old roof metal was removed that had been previously installed in 1976. The

good news was that the underlying wood sheathing was intact and was not showing any major signs of water damage, thus it did not need to be replaced. Shortly thereafter sub contractor, Northeast Masonry re-pointed the mortar around the chimneys, a job that was essential to waterproof potential leaks that might affect the integrity of the chimneys, the roof underlayment and the interior of the building. They did a wonderful job, especially in their efforts to match the existing mortar color. Later the cupola was painted with a fresh coat of bright white paint. A waterproofing membrane was then laid over the wood sheathing with the metal roofing material arriving on site in early October. Since then, Bison Construction’s roofing crew has been diligently working to get the metal installed before winter sets in. The job should be completed by the end of October. 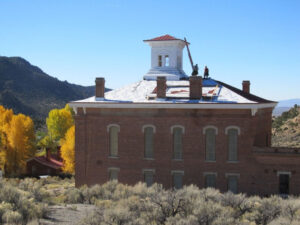 The photos were taken on October 20, 2012, a spectacular fall day in Belmont. The Colonial Red color of the standing seam metal roof really seems to have been a good choice for this restoration project. The finished roof complements the brickwork of the building and looks striking against the Nevada blue sky. Early in the planning stages, much discussion occurred as to what would be the best color for the project.

With the expertise help of Ron James of the 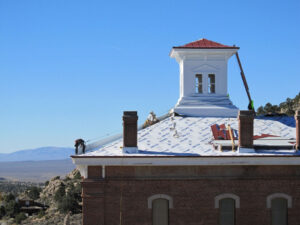 State Historic Preservation Office (SHPO) it was decided that Colonial Red would be the most historically correct color. The project thus far is a true affirmation of what can be accomplished when both public entities and private individuals work together for a common goal.

Friends of the Belmont Courthouse want to thank everyone who helped make this recent project become a reality.

This includes Nye County and its commissioners, the State Historic Preservation Office, Nevada State Parks, Bison Construction and their subcontractors and all the dedicated members and volunteers of the Friends of the Belmont Courthouse who have contributed their time, money and passion towards the first big step in restoring this grand old building.

Help us preserve the past and inspire future generations. Whatever the amount, we appreciate your support.
Make a Donation
Scroll to top